A/n: Eek! I haven’t posted in a month. In order to make sure I don’t abandon this blog (again), I plan to post a review on the second and last Fridays of the month.

In honor of my girl Serena Williams’ 5th win at the US Open and her 17th Grand Slam singles title, here’s my review of the documentary Venus and Serena. I heard about this film from Vanity Fair in May, and knew I had to see it. After failing to see it in theaters, I was able to see the film on Netflix Instant. Maiken Baird and Michelle Major, after years of persistent asking, were granted unprecedented access to the Williams sisters. The film follows the two tennis legends during 2011, a year full of hardships due to illness and injury. Excerpts from a 1992 interview with Venus, Serena, and Richard Williams, their father and former coach, are inter-cut magnificently with footage from their Grand Slam wins early in their career.

One of the reasons for the Williams’ continued success and respect from fans from all over the world, besides their obvious talent, is their amazing story. Venus and Serena grew up in Compton, a notoriously dangerous neighborhood in California. Their father, Richard, saw a tennis match and was inspired to turn his youngest daughters into the number 1 tennis players in the world. His plan and vision, which he wrote out in an encyclopedia length book, revolutionized the sport. Their training includes some of everything, from ballet to tae kwon doe and boxing. It was Richard’s idea to have them hit the ball in midair rather than waiting for it to bounce.

Having grown up watching Venus and Serena play, I really enjoyed the trip down memory lane courtesy of this documentary. However, this film stands out because it gives them the props they deserve. As African-American women, they have broken down a number of barriers. The all Williams final at the 2002 US Open generated so much press that it was moved to prime-time on Saturday night, a first for women’s tennis. A diverse group of celebrities, from Bill Clinton and Anna Wintour to John McEnroe and Chris Rock, are all featured and sing their praises. One of them made an interesting quote that shows just how incredible the Williams sisters are–the number of grand slams they each have would be double if the other wasn’t there.

Although the film didn’t provide me with much new information about the sisters, it still was very exciting to see them in their daily lives. Both Venus and Serena are very open throughout the film, and have no problem showing their less glamorous moments, a fact I have always found refreshing. I was shocked to see how serious Serena’s illness was in 2011, and also relived my sadness when Venus announced that she was diagnosed with Sjogren’s disease. 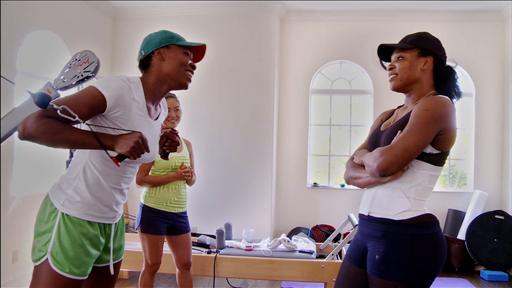 Another standout of the film is seeing the Williams sisters relationship with their family and each other. It is lovely to see how close they are, even after all their years of playing each other and living together. Although the directors’ questions seemed timid and purposely  indirect, Venus and Serena, as well as Oracene and Isha, their mother and sister, had no problem honestly commenting about their family. They openly state that they don’t have much contact with Richard’s other children (which I had no idea about), and find his some of his ways to be less than desirable (read ladies’ man). Nonetheless, it is clear that family is very important to them. The most touching moment is when they discuss the death of their older sister, Yetunde Price, at the hands of gang members; Venus openly shows her pain and sadness.

Baird and Major also do a great job of inserting lesser known, yet interesting tidbits about their ride to top. It is humorous to see Serena at 11 state her admiration for John McEnroe, especially now that both are known for their fiery tempers. A few incidents of racism are detailed, namely the American crowd’s opposition to Serena during a tournament at Indian Wells in the 90s. Despite these challenges, they have always remained confident, determined, and proud to be black. This documentary makes it abundantly clear that the tennis world will experience a huge void when they retire; I couldn’t agree more.