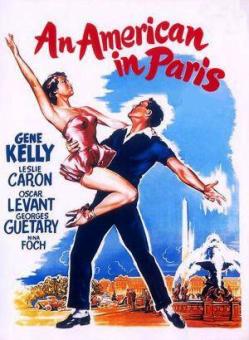 I don’t know if this is obvious, but I love musicals. For real. I even wrote about The Lion King (the musical of course) for my college essay. When I saw An American in Paris come on TMC a few days ago, I had to stop and watch it. Needless to say, I thoroughly enjoyed it. The plot is simple. Jerry Mulligan (Gene Kelly) is an American and a starving artist living in Paris. Milo (Nina Foch), an American heiress, likes Jerry’s work and decides to become his sponsor, with hopes that a relationship will bud between them. However, Jerry has other plans and soon sets his sights on Lise (Leslie Caron), a lovely French girl. The trouble is Jerry doesn’t know Lise is engaged to Henri Baurel (Georges Guetary), a famous French singer and a friend of Jerry’s.

Almost everything in this movie seems to work together fabulously. Kelly, Guetary, and Oscar Levantt(as Adam, Jerry’s cynical friend) work marvelously together and I loved their characters. Gene Kelly‘s turn as the mouthy street-smart Jerry is enjoyable; however, the smiling and charming characters Kelly is known for, of course emerges once he starts dating Lise. Guetary, who is a famous singer like his character, is great as Kelly‘s French counterpart. The similarities between their characters, which are both romantic, cheery, and madly in love, are wonderfully shown in the number “‘S Wonderful.” Nonetheless, I surprisingly found Levant very entertaining as Adam, the unemployed concert pianist. As the “Debbie Downer” of the film, he provided a much-needed contrast to Jerry and Henri. His moment to shine surprisingly comes when he inhabits a comedic role, trying to stop Jerry and Henri from realizing they are in love with the same woman.

It is clearly evident that the cast enjoyed making this movie, which made my own viewing experience more enjoyable. The film is a fantastic ode to Paris; the city is almost a character itself. I was surprised to learn that Kelly could speak French and loved their culture. The scene when he teaches the French children “I Got Rhythm” in English is one of my favorites. The dancing and music throughout is phenomenal thanks to Gene Kelly‘s choreography and George Gershwin‘s undeniable genius. The lengthy scene in which Adam imagines he is playing every instrument in a full orchestra is barely tied to the plot; nevertheless, it is easily forgivable since its purpose is to showcase Gershwin‘s “An American in Paris.” The same goes for the full-length ballet that appears just before the film’s close. It was kind of random and a bit long, but undeniably gorgeous (both costume and set-wise), featuring awesome choreography. Other stand-outs are “Embraceable You” which shows Lise’s multifaceted personality, as well as the fun “By Strauss.” Kelly manages to make the two older women he dances with appear to be extremely graceful dancers themselves.

An American in Paris also shines thanks to Leslie Caron who plays Lise. Even though her acting wasn’t top-notch, her dancing skills more than made up for it. Lise and Jerry’s romance is cute and perfectly depicted through their dance alongside the Seine River. This scene is also one of my personal favorites. It is reminiscent of “Never Gonna Dance” from Swing Time, but still unique. The scene is perfect because the dance encapsulates their personalities and relationship. Because Kelly and Caron are actually dancers, and excellent ones to boot, the scene is much more magical. Today’s Hollywood should take a note: if you’re making a movie about a person who has a specific talent, it really helps if the actor has that skill.

Of course the ending was kind of cliché, but I wouldn’t expect anything less from a classic musical. I’m still curious what made Henri let Lise leave him for Jerry. I suppose his belief in true love is the reason.

I do have a bit of a feminist critique to pose. It was extremely interesting that Milo, Jerry’s sponsor, was not a love interest because she behaved too “manly.” One aspect of the film that kind of bugged me was how rude Jerry was to Milo; he went so far as to ask out Lise in front of her. The fact that she is regarded as “manly” simply because she asked him out would be laughable if society didn’t still (at least partially) hold women to this standard. The message of the film is clear: women who are assertive and self-assured end up unhappy and alone, like Milo.

2 thoughts on “An American in Paris”