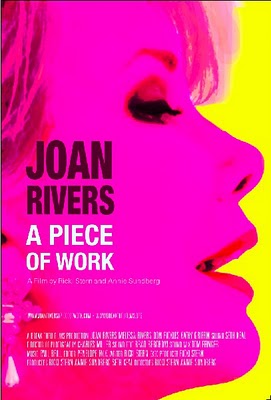 The phrase “a piece of work” is one I’ve grown up hearing, often in reference to myself. It is often used to refer to someone who has a strong personality, one which can cause people to have equally strong feelings, good or bad, about said person. In this sense, the phrase definitely suits comedienne Joan Rivers. However, instead of focusing on Joan’s boisterous personality, Joan Rivers: A Piece of Work digs deeper and reveals a woman who is constantly pushing herself to progress.

As the camera zooms in on a scheduling book that is far from filled, the viewer discovers that Joan is at a self-described “low-point” in her career. The “good years,” as she calls them, are when her schedule was full to the brim with multiple shows and appearances each day. Now she has to wear sunglasses because the amount of white space in her book is blinding. The film stays in this vein for its entirety, showing Joan‘s unbelievable work ethic, even at the ripe age of 75. Her dislike of being called a legend since she’s  still “opening doors” was extremely intriguing. I interpreted her dislike, which often included bitter comments about admirer and fellow comedienne Kathy Griffith, as another example of Americans’ tendency to have careers define them.

Since I’m a fan of Joan Rivers due to her red carpet commentary, it was very interesting to hear her life story from her point of view. In true Joan fashion, she is shamelessly honest and open. Surprisingly, she began her career as an actress, something which defines her personality even to this day. When speaking about the negative reviews of her Broadway show Fun City, which opened in 1972, she shows how sensitive she really is. After guest hosting The Tonight Show with Johnny Carson for 20 years, she left to start her own talk show, which would be canceled soon after its start. Johnny Carson subsequently had her blacklisted and her husband committed suicide. Later on Joan became a plastic surgery freak-show due to her willingness to be open about her surgeries; nonetheless, she takes it in stride. Once again the double standard concerning women and beauty becomes glaringly obvious.

Despite these setbacks, Rivers has gone on to become one of the most successful female comedians of all time. While giving out meals to those in need, she meets an older woman who was an attractive young photographer, but is now poor and wheelchair bound. She realizes how life can take a turn for the worst and is always thankful for her own success. Her generosity is seen as she signs a stack of bills for her family members and staff.

It is this constant awareness of her fortunate status that makes Joan so appealing. Even though she is constantly striving to stay relevant, it’s not out of greed, but rather out of genuine love for performing. A Piece of Work does an excellent job of removing the layers of negativity unfairly cast onto Joan Rivers and revealing a generous and legendary woman who is quite human.