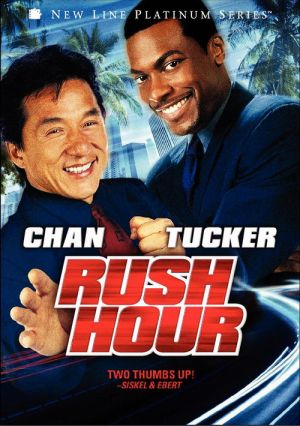 I hadn’t originally planned to watch Rush Hour since I’ve seen it so many times, but once my sister put it on I couldn’t stop laughing.

Rush Hour is hilarious from start to finish and my sister and I constantly quote it. Chris Tucker is funny as the cocky L.A.P.D. officer James Carter, mostly because he acts just like a regular black person. His loud exclamations of “Imma slap you” crack me up, as well as his celebratory Michael Jackson dance moves. Jackie Chan is also great as Inspector Lee and his stunts are ridiculous. I give him major kudos for doing his own stunts, especially considering the crazy number of injuries he’s received over the years.

The best part of this movie is Chan and Tucker‘s unlikely friendship that surprisingly works. Like a typical American, Carter is rude to Lee and assumes that he doesn’t speak “American.” I love that Lee fixes him by pretending he can’t understand English. The two eventually come to an understanding and work together to save Consul Han’s daughter, who is adorable and funny in her own right. The scene where they dance to the song “War (What Is It Good For)” is amusing and felt to two friends joking around. The friendship was so believable partially because the two actors are friends in real life.

This movie is one of my favorite comedies and has me dying with laughter every time. It also showed me the power of film. When I went to see Rush Hour 2 the audience was a mix of black and Asian people. This movie is a testament to film’s ability to bring people together.