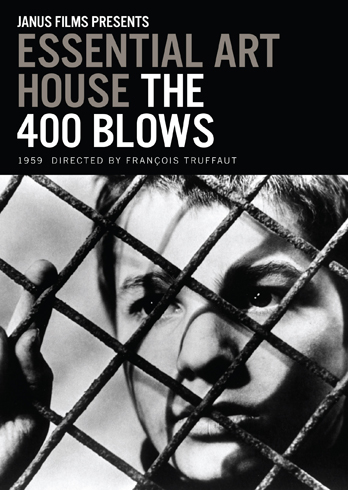 I had no (and still don’t have) real background on François Truffaut, The 400 Blows, or French New Wave cinema coming into my viewing of this film, which may be the reason I didn’t really understand it. The plot is simple enough: Antoine, a Parisian boy around 13, is neglected by his parents and gets involved in petty crime. Nonetheless, this film lacked character progression and an ending that actually resolved something.

The cinematography is gorgeous and the cast, particularly the children, are excellent. They are cute and relatable and Truffaut does a great job of capturing their world and sense of reasoning. I was reminded of the absurd strictness of elementary school and the tons of useless information kids are forced to memorize, not to mention silly skills like dictation. (Is this secretary training? Why do I need to learn how to take dictation?) I also thought the scene with the little kids watching the puppet show was adorable, even though it wasn’t necessary.

Jean-Pierre Léaud is fantastic as Antoine. He embodies a little boy who clearly thinks he is a grown man, from his serious facial expressions right down to his manner of walking. (Side note: I just realized that I’d searched for Léaud before when I found out he was Louis Garrel‘s godfather. It’s pretty cool that you can see how talented he is even as a child. It’s kind of cute how he looked the same when he was a young man.) His relationship with René felt genuine, seeming like two adult men as they shook hands before departing for home at the end of each school day. I found the difference in their social classes interesting and I appreciated the subtle differences, like their clothing, that indicated this. René’s casual disobedience of his teacher reminds me of the fact that it is often privileged people who are the first to be rebellious and protest, but they often face no consequences for their actions; they simply return to their comfortable lifestyles after the dust has settled.

Despite the superbly crafted world of the children (and the awesome title), The 400 Blows falls flat in the plot and logic departments. There are some indications of why Antoine started misbehaving and began stealing, such as his child-like reasoning, which explained why he thought he needed to strike out on his own, and his knowledge of the fact that his mother didn’t want to have him in the first place. His parents also didn’t seem to care about him much because they didn’t bother looking for him when he ran away and spent several days at his friend’s house. Nevertheless, none of these things adequately explained why Antoine continued to lie and steal, and I didn’t sympathize with him. I was surprised how open he was with the psychologist because he never was honest with his parents; I suppose this was a way of, ineffectively, telling us he wanted to be heard.

Maybe I’m a jaded 21st century kid, but I didn’t see Antoine’s actions as such a horrible problem. He only stole some milk and a typewriter, which he tried to return; that definitely didn’t warrant his parents turning him into the police, even though I suspect that they just wanted to get rid of him. However, this is the only scene where I felt somewhat bad for Antoine because, as he cried on his way to prison, he reminded me that he was actually a child. I agreed with the police chief in the film that the boy simply needed a spanking.